I often get asked for advice on how to buy an electric guitar.  Which one is the best one? How much will it cost?  Any particular brands?

Well I was going to write an article on that and out of interest I googled ‘How do I buy an electric guitar?’ and about one million links appeared, all with good info (I’ll put some of the links at the end of this blog).  So instead of rehashing a pretty well worn topic, I went to have a cup of tea. 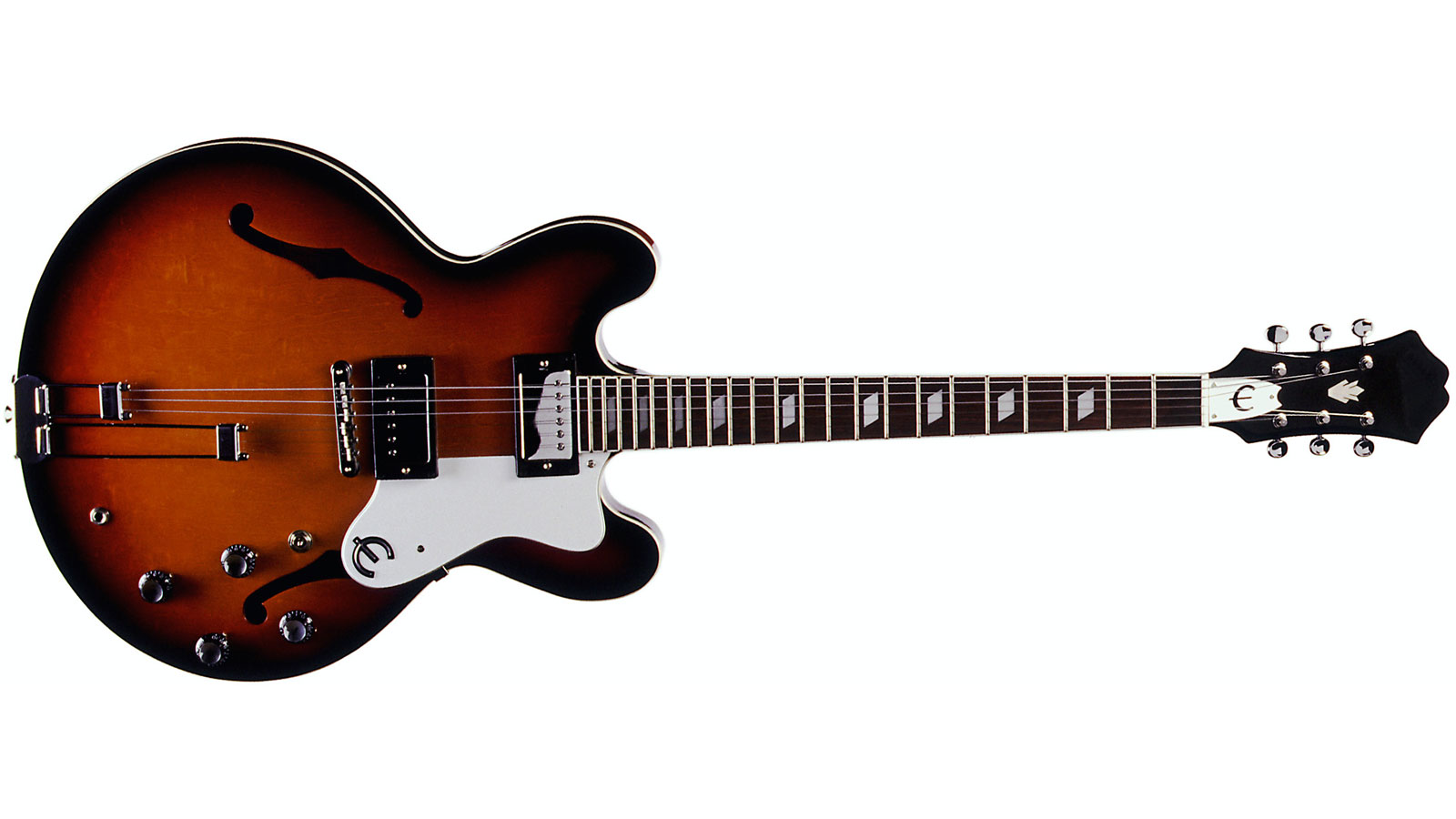 As I let the tea cool, I thought about my first electric guitar, how I don’t have it any more and a familiar feeling common to many guitar players hit me.  Guitar Sale Regret.

At about a quarter the way through my cup of tea, I started thinking about how I’d decided which electric guitar I wanted when I started out.  The pre-buying experience was a bit like this great clip from Wayne’s World, though at my local store they wouldn’t let me actually play one – the shop owner and I knew that there were a lot of 4 hour Saturday shifts at the local department store between me and an electric guitar.

Like Wayne from Wayne’s World, all guitarists craved an American made guitar.  It was a given that the quality of US made instruments was far superior to guitars made elsewhere and of course that made them super expensive and super desirable.  When you add in the mix the small chance that the single guitar shop in my small town in the UK would actually have a US-made Fender in stock, my quest seemed hopeless.

Fortunately for guitar players the situation today is very different.  I think the cachet of the US-made guitar is diminishing as guitar players realise they can get as good, or nearly as good instruments for a fraction of the price.  The build quality of instruments from other countries has dramatically improved, so much so that international and domestic competition has driven the price of US-made guitars down and now they’re cheaper than ever.   It is safe to say that the bang your buck makes today is loud, clean and clear, looks good in sunburst, has a straight neck, a clear finish and good components.

How did this happen? Well Fender, Gibson et al. all started to make guitars in different locations with accordingly different price tags –  the good thing is that the products coming out of, for example, China, is actually very good.  The factories where the guitars are made under licence from Fender, or whoever, have strict quality control and use good components.  When I think of the variety, quality, availability and affordability of entry-level guitars today, then add in the open-all-hours store that is the internet as a multiplier, then there’s never been a better time to buy a guitar.  I certainly don’t care that much about where guitars are made any more. My wall has guitars from America, Japan, Mexico, South Korea and China. Amplifiers too. 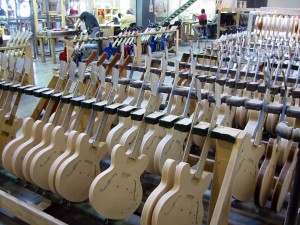 Halfway through my tea, I started thinking why I had wanted a Stratocaster so badly.  Actually there were two reasons: Jimi Hendrix and Eric Clapton.  They were my favourite guitarists.  I’d recommend the same approach to you.

Also consider this, and I know it kind of sounds obvious, different electrics make different types of sounds.

Like the sparkle on Apache by the Shadows?  Get a Stratocaster.  Love the grit of Led Zeppelin’s Heartbreaker?  Get a Les Paul. Want to play that great G7sus4 chord at the beginning of Hard Day’s Night? Get a Rickenbacker.  I think the main thing is, if you like a particular band or artist’s sound, why not just copy them?  When they originally chose their first guitar, they were probably trying to emulate their heroes too. 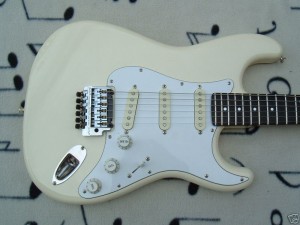 So, the first electric I owned was a white Fender Stratocaster.  Just like the one in the photo.

It was white (like Jimi Hendrix’s) and it was a Fender Stratocaster.  A Fender.  Did I say it was a Fender? The best thing, apart from the sound, how it looked and how loud it could be, was that it said Fender on the headstock.  Instant cool.  I really never should have sold it.

And by the time I’d finished the tea? Well, I’d come up with the idea for this article and a few others….blogs coming up will cover guitar family trees, what guitar is on that song and my own and others’ stories of Guitar Sale Regret.

Oh and here are some of those links on ‘How do I buy an electric guitar?’.

21 Things You Should Know Before Buying an Electric Guitar

Check out the Reverb Blog