When I first started this blog, I promised among other things some gear reviews.  And well, I’ve been a bit slack on the gear review front.  Too much time playing with the gear not enough time writing about it.  I guess that’s not so bad… anyhow, once you’ve had a read and listened to the content below I’m sure you’ll see why…!

I’d been a traditional 50/100w combo amp kind of guy until about 5 years ago.  I play mostly in small club environments and having a 100w combo is like using a sledgehammer to crack a nut.  Firstly, the volume that comes with that beautiful tube tone doesn’t exactly make you the booker’s/owner’s/sound guy’s friend and secondly, the 20+kg weight was starting to weigh me down…and so that started me thinking about smaller wattage and lighter amps.

Now, like most folks I don’t have a money tree in the back yard, so shelling out large on a small amp wasn’t really a possibility.  What I wanted was a 15w amp with a 12inch speaker.  I’ve had a Fender Pro Junior and more recently a Fender Champ XD and while the 10inch speakers enjoyed their Telecaster times, they just weren’t happy with my Gibson.

– A cabinet for the Fender Champ XD

So for the first time for ages I went off to a guitar shop, (for Sydneysiders I actually went to Icon Music in West Ryde and spoke to the super helpful Gino).  I tried all of the above (apart from the Fender Princeton – I tried that at Pete’s Musicians Market in Newtown).  Gino was super generous with his time and I gave all of the amps a great run.  Eventually I decided on the Egnator Tweaker and was about to splash the cash when Gino suggested I try this interesting looking 70s looking white tolex number in the corner.

When I saw the Ibanez badge, my internal guitar brand snob kicked in and I was dubious, but Gino had been a so helpful that I thought I’d try it out.  About 30 seconds in I couldn’t believe the how good it sounded.  For the first time in 25 years of buying guitar gear, cheaper was better!

So, sorry about the preamble, here’s the review… 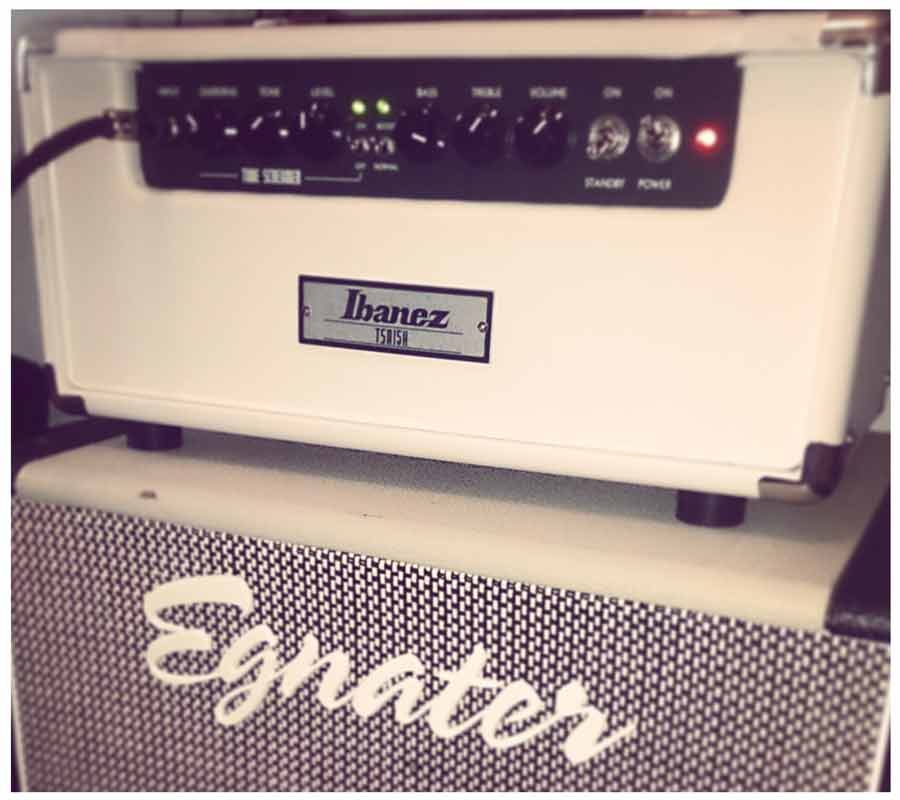 The first thing to notice about the amp is that it has a Tube Screamer built in, so that effectively acts as your overdrive circuit and then there is a whole amp boost which you can use on both the Tube Screamer and Clean channels.  This functionality is controlled by an optional extra footswitch.  The boost over the clean channel was the first big plus for me as I love to play clean leads, not such a big plus for my Danelectro Transparent Overdrive though…

There’s a beautiful warmth to the amp that really suits the blues/rock/pop genre.  The cleans are pristine, the overdrive goes from slight grrrr to a pretty substantial roar and the tone controls really make a genuine impact on the sound produced.  Another big bonus is that the amp is switchable between 5 watts and 15 watts.  My main gig is as a guitar teacher, so I spend over 25 hours a week teaching. However, I don’t always want to be blown away when searching for the sound I want, so the 5 watt setting does that for me.  Equally, the 15 watts have easily been enough to cope in a live setting and can easily be heard over acoustic drums.  It’s great to finally have a tube amp truly working – I’ve typically had the volume set at about 7/10.

In addition to bass and treble controls on the Tube Screamer side there’s a tone control which only adds to the tone control available to you – I’ve also found adjusting the guitar’s volume works well as a tone variant with the amp. My main guitars are a Gibson CS336, Fender Telecaster and Rickenbacker 350 and the sounds available with those guitars and just the amp have meant I’ve left the pedal board at home and had a one trip load in for gigs since I bought this thing.

There only two things that I’d put as negatives:

-On the Tube Screamer side, even with the drive dialled down to minimum, it’s still a bit too drive-y for certain clean drive sounds.  (Maybe a reprieve for the Danelectro Transparent Overdrive?)

On the matching cabinet thing, I didn’t love the sound of the Ibanez cabinet and I already had a second hand Egnator cabinet.  Better speaker, better construction equals better sound.

So there you go.  If you are a blues/rock/pop player on a budget this must be the amp for you.  I bought the amp, cabinet and extension footpedal all for around $550.  Incidentally, less than the price of the Egnater Tweaker head by itself…